Thanks and congratulations to all involved in the release! Cheers!
Posted by Jonathan Anstey at 5:07 PM No comments:

We did it again +Claus Ibsen :-) Camel in Action, 2nd edition is printing as I type this blog and will be in book stores in a few weeks. Time to celebrate!

Our theme this time around is more - more of everything to help you get started with Apache Camel and more for seasoned integration vets too. Well, this has kinda been the approach in Apache Camel since the last book as well. Let's look at some stats from the Camel versions used in each book edition:


So yeah, Camel is a lot bigger this time round and so our book had to be too :-) It's amazing how much the project has grown TBH. The component count has more than tripled, LOC near that as well and the number of contributors has just blown up. Now, granted back in the early days of Camel we used SVN which didn't allow named contributors to be counted until they were actual Apache Camel committers themselves (GitHub PRs to the rescue!!). Still, I estimate the actual number of contributors has doubled at the very least.

It's not just components that have been added to Camel either. This time we needed to cover more topics like: microservices, RESTful web services, containers (think docker/kubernetes), clustering, reactive apps, security, and even IoT. Like last time we had a guest author contribute a chapter about a new emerging technology. Big thanks to Henryk Konsek for contributing the chapter on IoT. Neither myself or Claus has any experience in IoT so we probably wouldn't have covered it if we didn't get an expert on board :-)

A huge thanks to Claus for being such a pleasure to work with (albeit being a bit hard to keep up with ;-) ). Looking forward to next time round!

And finally, let me leave you with one of my favourite lines from our book:

Posted by Jonathan Anstey at 10:43 AM No comments: 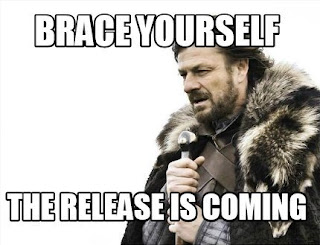 JBoss Fuse 6.3 just went GA, get it while it's hot :-) With this release we didn't do anything too crazy and had a big focus on stability of the platform and bug fixes. In fact there are thousands of bug fixes over Fuse 6.2. We do still provide a few notable project upgrades however:


As well as API updates:

So those are some bigger things to consider when upgrading your projects to Fuse 6.3. A full migration guide is available as well. A lot of the brand spanking new stuff in this release comes in via Camel. For instance, you may find some of the new Camel components useful:

Another change this time is the Maven repo. Previously you may have used repository.jboss.org or repo.fusesource.com to download Fuse artifacts. With this release, we have migrated to https://maven.repository.redhat.com/ga.

You will notice too that the Fuse Eclipse tooling has undergone a visual makeover. Look at this new flow style for Camel routes: 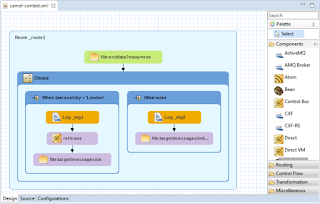 The site updates are still in progress (prolly another few hours to go) so make sure to click the 6.3.0 link and not the big red download button which still points to 6.2.0 :-)

Happy integrating!
Posted by Jonathan Anstey at 1:24 PM No comments:

Manning just published a new MEAP of Camel in Action this week so I figured I'd give a little update on our loooong journey with the 2nd edition :-)

The latest MEAP contains one new chapter, in addition to some fixes in other chapters. The basic outline for the "Developing Camel projects" chapter is:
A lot of this still applied from the first edition with the exception of debugging, custom data format creation, and using the super cool API component framework.

Claus is busy working on a more interesting chapter titled simply "Microservices". Yes, we are devoting a whole chapter to this buzzword :-) Really, it was unavoidable as Camel has been growing to have 1st class support for great frameworks like Spring Boot and Wildfly Swarm. Also microservices is just a little bit popular right now ;-)

So what's next? Well, we only have a handful of chapters left to write and hope to have it all handed in by the end of the year. So you can expect a print copy early next year after Manning polishes our work.

Cheers!
Posted by Jonathan Anstey at 5:27 PM No comments:

Posted by Jonathan Anstey at 4:40 PM No comments:

It's getting close now to CamelOne 2013, the conference all about open source integration and messaging. I've been fortunate enough to have been a part of previous CamelOne events over the years and lemme tell you, it's been great. We try to keep fluff low, with lots of hands on technical talks.

For the talk I'll be giving an update on the ServiceMix project, discussing best practices for developing and running Camel-based integration solutions in ServiceMix, and of course I'll use live demos throughout to demonstrate the concepts.

Posted by Jonathan Anstey at 2:44 PM No comments:

Hope to see you there!
Posted by Jonathan Anstey at 9:33 AM No comments: