Camel in Action is complete! 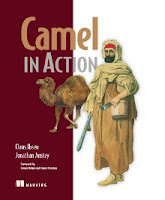 So we did it. Camel in Action is headed to the press! Time for beers and all that, but first a little blog post :)
I had to actually search through my mail to find out when I started on this project. Turns out I got involved mid September 2009 which puts the time in about 15 months. Claus started before that so his month count is higher - poor guy ;) So it was a pretty big chunk of time for both of us but not too bad for a technical book I'm told.
We set out to create something that the growing Apache Camel community needed badly - a great reference for newbies and experts alike. I'd like to think we accomplished that goal. Seems the early access readers agree too.
Thanks to all who were involved in producing this book. We had tons of very helpful reviewers, Manning staff, and even multiple foreword writers - there were a lot of people involved in creating this other than Claus or myself. Of course, we officially thanked the folks involved in the acknowledgements section so be sure to look there if you helped out :)
I have yet to see anything other than a PDF copy of the book (which should be released tomorrow) so I'm really looking forward to when the print copies start showing up in 10 days!
Also, feel free to use the "camel50" code for 50% off when ordering through http://manning.com/CamelinAction
Now its time to celebrate.
Posted by Jonathan Anstey at 11:44 AM 2 comments: